EXHIBITS the monument of HENRY BOURGCHIER, the first Earl of ESSEX of that ancient family, which had been settled at Halsted in the county of Essex from the reign of Edward III. and of ISABEL PLANTAGENET his wife, in the church of Little Easton, in the said county.

HENRY was born 1404. In the life of his father, and after his decease, which happened 8 Hen. VI. he retained in the king’s service in his French wars. 13 Hen. VI. he had summons to parliament by the name of earl of Ewe, in right of his cousin Elizabeth widow of Sir Lewes Robsert, and daughter and heir of Bartholomew lord Bourgchier. 25 Henry VI. he was advanced to the dignity of viscount Bourgchier, and had summons to parliament by that title in that and following years. 28 Henry VI. he was joined in commission with James earl of Wiltshire and others in the governorship of the town and castle of Calais, the tower of Rysebank, and the marches of Calais, for five years. 31 Henry VI. 1452, he was created Knight of the Garter. 33 Henry VI. he was constituted lord treasurer of England. 38 Henry VI. he was with the earls of March and Warwick at the battle of Northampton, wherein Henry VI. was defeated. For this attachment to his interests Edward IV. constituted him lord treasurer; and by letters patent bearing date June 30 the same year, advanced him to the title of earl of Essex.

Polydore Vergil2 informs us, that he was so highly esteemed by Richard duke of York, that he gave him his sister Isabel in marriage in his younger years. Edward IV. in the 4th year of his reign, in consideration of the charge he had been at in his service, granted him licence to transport 1600 woollen cloths, of his own or any other, without any account or custom for the same. 11 Edward IV. he was again constituted lord treasurer; and 14 Edward IV. in consideration of his further services, obtained a grant of the castle, honour, and lordship of Werke, and the honour and lordship of Tynedale in Northumberland, the manors of Aylesbury, Boorton, and Woddesdon in Buckinghamshire, Great Holand, Foxerth, and Chingford in Essex, Acton, and Moreves in Waldingfield in Suffolk, Chellefield, Estwell, and Ashe in Lancashire, Colvilles, Zouches, and Shardelow in Fulburne in Cambridgeshire, to himself, his wife, and the heirs of their bodies. 17 Edward IV. he was appointed one of the com-[missioners] 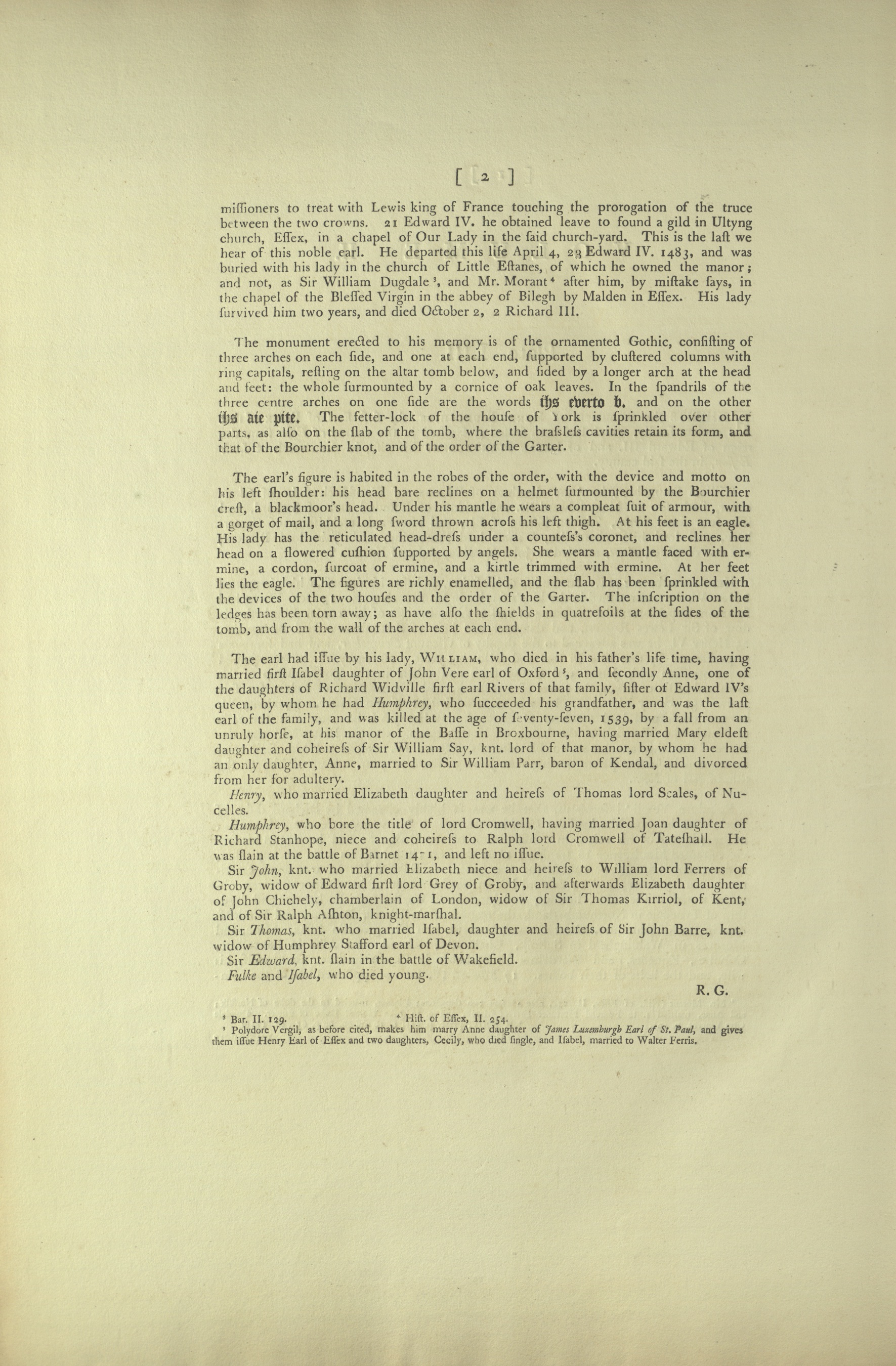 [com-]missioners to treat with Lewis king of France touching the prorogation of the truce between the two crowns. 21 Edward VI. he obtained leave to found a gild in Ultyng church, Essex, in a chapel of Our Lady in the said church-yard. This is the last we hear of this noble earl. He departed this life April 4, 23 Edward IV. 1483, and was buried with his lady in the church of Little Estanes, of which he owned the manor; and not, as Sir William Dugdale3, and Mr. Morant4 after him, by mistake says, in the chapel of the Blessed Virgin in the abbey of Bilegh by Malden in Essex. His lady survived him two years, and died October 2, 2 Richard III.

The monument erected to his memory is of the ornamented Gothic, consisting of three arches on each side, and one at each end, supported by clustered columns with ring capitals, resting on the altar tomb below, and sided by a longer arch at the head and feet: the whole surmounted by a cornice of oak leaves. In the spandrils of the three centre arches on one side are the words ihs everto b. [translation here] and on the other ihs aie pite. [translation here] The fetter-lock of the house of York is sprinkled over other parts, as also on the slab of the tomb, where the brassless cavities retain its form, and that of the Bourchier knot, and of the order of the Garter.

The earl’s figure is habited in the robes of the order, with the device and motto on his left shoulder: his head bare reclines on a helmet surmounted by the Bourchier crest, a blackmoor’s head. Under his mantle he wears a compleat suit of armour, with a gorget of mail, and a long sword thrown across his left thigh. At his feet is an eagle. His lady has the reticulated head-dress under a countess’s coronet, and reclines her head on a flowered cushion supported by angels. She wears a mantle faced with ermine, a cordon, surcoat of ermine, and a kirtle trimmed with ermine. At her feet lies the eagle. The figures are richly enamelled, and the slab has been sprinkled with the devices of the two houses and the order of the Garter. The inscription on the ledges has been torn away; as have also the shields in quatrefoils at the sides of the tomb, and from the wall of the arches at each end.

The earl had issue by his lady, WILLIAM, who died in his father’s life time, having married first Isabel daughter of John Vere earl of Oxford5, and secondly Anne, one of the daughters of Richard Widville first earl Rivers of that family, sister of Edward IV’s queen, by whom he had Humphrey, who succeeded his grandfather, and was the last earl of the family, and was killed at the age of seventy-seven, 1539, by a fall from an unruly horse, at his manor of the Basse in Broxbourne, having married Mary eldest daughter and coheiress of Sir William Say, knt. lord of that manor, by whom he had an only daughter, Anne, married to Sir William Parr, baron of Kendal, and divorced from her for adultery.

Henry, who married Elizabeth daughter and heiress of Thomas lord Scales, of Nucelles.

Humphrey, who bore the title of lord Cromwell, having married Joan daughter of Richard Stanhope, niece and coheiress to Ralph lord Cromwell of Tateshall. He was slain at the battle of Barnet 1471, and left no issue.

Sir Edward, knt. slain in the battle of Wakefield.

Fulke and Isabel, who died young.