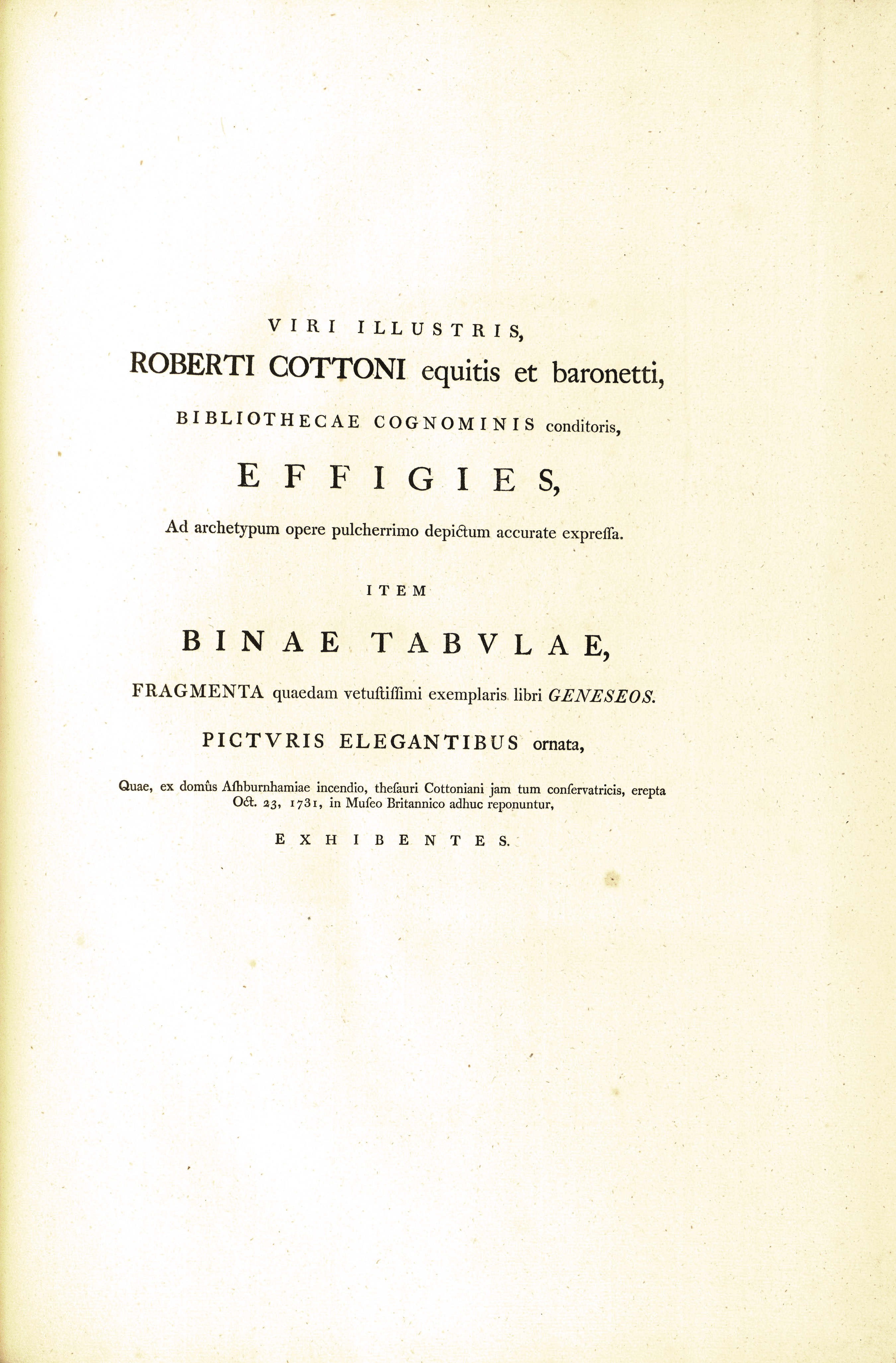 Portrait of the nobleman, Robert Cotton, knight and baronet, founder of the library bearing his surname, accurately produced after its archetype, a beautifully painted work. Likewise, a pair of plates showing some fragments of the oldest exemplar of the book of Genesis, adorned with elegant pictures, which were rescued from the fire at Ashburnham house, at that time the repository of Cotton’s treasure, on October 23, 1731, and are currently held in the British Museum. 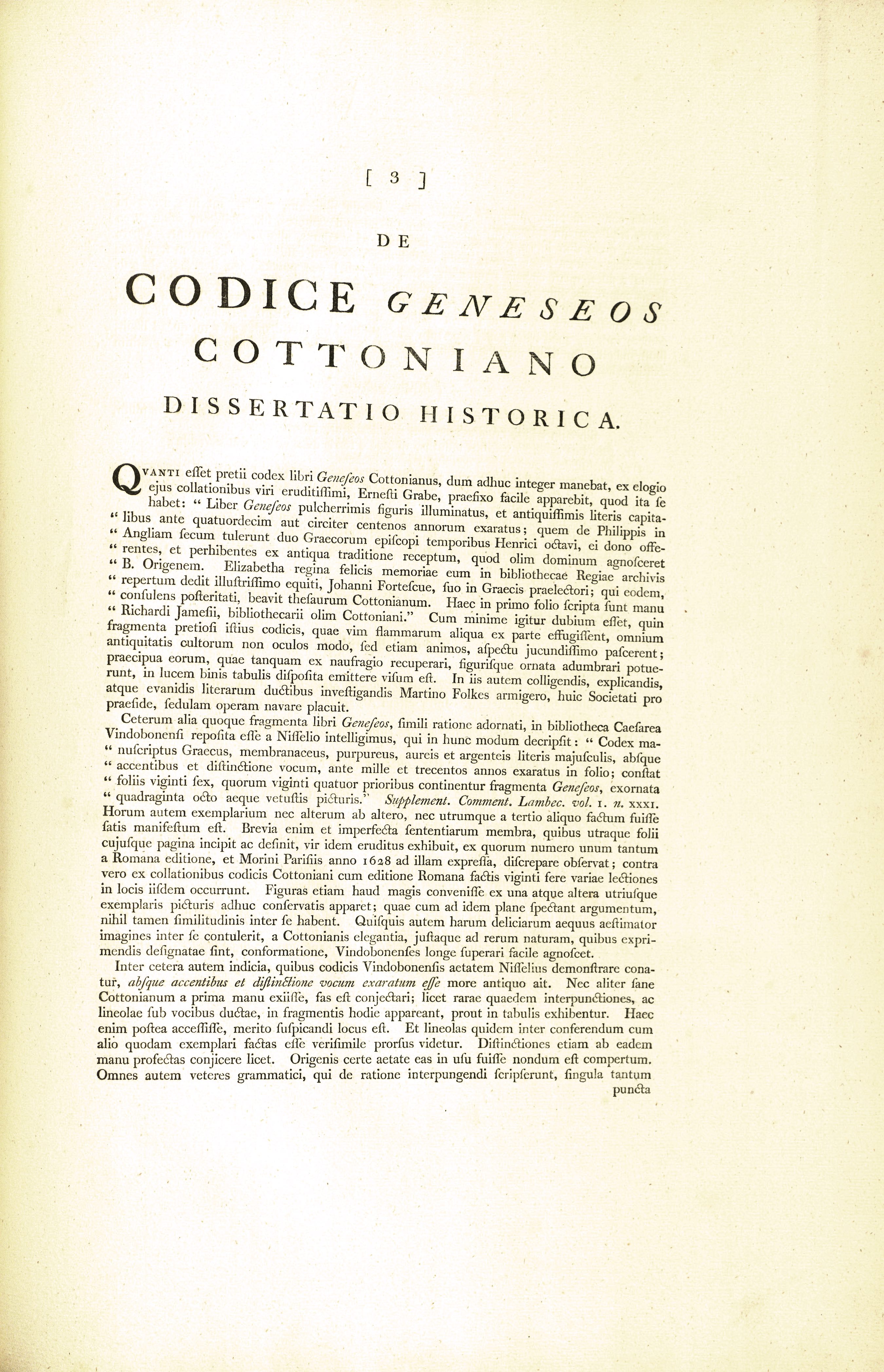 What the value of Cotton’s codex of the book of Genesis was, while it still remained intact, will be easily apparent from its inscription, prefixed to the collations of Ernest Grabe, a most learned man, which goes as follows:

“The book of Genesis, illuminated with the most beautiful designs and written in the most ancient capital letters about fourteen hundred years ago; two Greek bishops brought it from Philippi to England in the times of Henry the Eighth, offering it to him as a gift, and asserting that it was received from an ancient tradition because it was once owned by St. Origen. When it was found in the archives of the Royal Library, Elizabeth, queen of blessed memory, gave it to John Fortescue, a most honorable knight and her tutor in Greek. Out of consideration for posterity, he, in turn, blessed Cotton’s library with it. These things were written on the first page by the hand of Richard James, at one time Cotton’s librarian.”

Since, therefore, there was little doubt but that fragments of this precious codex, which had escaped the destructive force of flames in some measure, gratified with [its] most agreeable appearance not only the eyes but also the minds of all lovers of antiquity, a decision was made to publish, arranged on a pair of plates, the best parts of those fragments, which were able to be recovered from the shipwreck, as it were, and to be reproduced with illustrations. Martin Folkes, esquire, acting as President of the Society of Antiquaries, agreed to perform the arduous task of collecting and arranging them and of deciphering the fading contours of their letters.

Moreover, from Nisselius we understand that still other fragments of the book of Genesis, illuminated in a similar fashion, were kept in the imperial library at Vienna. He described it in this way: “A Greek handwritten codex, on parchment, purple, with gold and silver capital letters, without accents or spaces between the words, written one thousand three hundred years ago in folio; it is composed of twenty-six pages, the first twenty-four of which contain fragments of Genesis, embellished with forty-eight pictures of the same date.” Supplement. Comment. Lambec. vol. I. n. xxxi. It is not sufficiently clear, however, whether one of these copies was made from the other or both were made from some third [source.] For the same learned man noted short, incomplete parts of sentences, with which each folio page begins and ends, of which number he observes only one discrepancy from the Roman edition and [from the version] of it published by Morini in Paris in 1628; on the other hand, from the collations of Cotton’s codex made with the Roman edition, about twenty variant readings occur in the same places. It appears that even the figures in the two copies no longer match, though their pictures have still been preserved; and those, even when they clearly look to the same subject matter, nevertheless have nothing in common between them. However, whoever, as a fair judge of these delights, compares the images between them, will easily recognize that the Viennese ones are far inferior to the Cottonian ones in terms of elegance and proper conformity to the nature of things they have been designed to express.

Among other indications by which Nisselius tries to demonstrate the age of the Viennese codex he says that “it had been written without accents and distinctione vocum [spaces between words]” as was the ancient custom. It is fair to suppose that the Cottonian codex was finished no differently by its first hand, even though punctuation can occasionally be seen in the fragments today as well as underlining, just as we see in the plates. For there are good grounds to suspect that these were added afterwards. And it seems quite likely that the underlining was done in comparison with some other copy. One may even conjecture that signs of interpunction [distinctiones] were made by the same hand. It is not yet entirely known whether they were in use at the time of Origen. However, all ancient grammarians who wrote about methods of punctuation only mention single points, [page break] 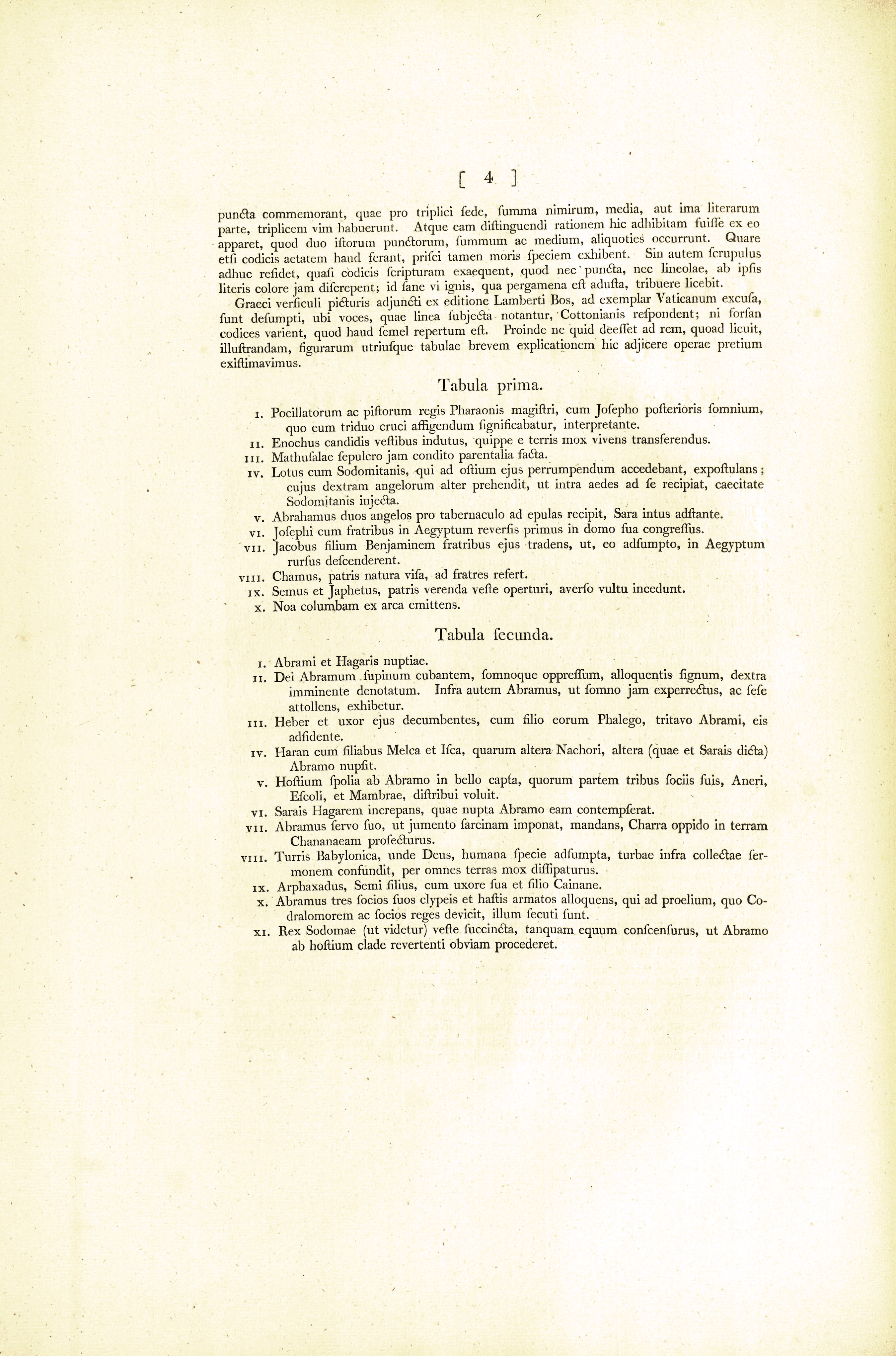 which had three functions corresponding with their three positions, namely, at the top, in the middle, or at the bottom of letters. And it appears that that manner of marking has been applied here because two of those points, at the top and in the middle, sometimes occur. Therefore, even if they should not bear the age of the codex, nevertheless, they exhibit the mark[s] of ancient practice. But if doubt still remains whether they would almost equal the writing of the codex [in age], because neither points nor underlining are now distinguishable from the letters themselves in color, one may attribute [this uncertainty] to the force of [the] fire, by which the parchment was singed.

Greek verses, affixed to pictures, have been chosen from the edition of Lambert Bos, produced according to the Vatican copy, in which the underlined words correspond to [those in] Cotton’s; unless the codices should be found to vary, which has not once been found to be the case. Now then, so that nothing might be lacking, as far as it was needed to illustrate the subject, we judged it to be worth the effort to add here a brief explication of each plate of illustrations.

I. The chief cupbearer and chief baker of king Pharaoh with Joseph interpreting the dream of the latter, which indicated that he would be nailed to the cross in three days. [Gen 40:5]
II. Enoch, dressed in white clothes, soon to be translated alive from earth. [Gen 5: 24-26]
III. Funeral rites for Methuselah, now buried in his tomb. [Gen 5: 27-29]
IV. Lot making inquiries with Sodomites who were arriving at his door to break it down; one of the angels takes his right hand to receive him within the house while the Sodomites are struck with blindness. [Gen 19:11]
V. Abraham receives two angels for a feast outside his tent while Sarah stands inside. [Gen 18:15]
VI. Joseph meeting at home with his brothers after they have returned to Egypt. [Gen. 43:30-31]
VII. Jacob entrusting his son Benjamin to his brothers so that, when he has been received, they might descend again to Egypt. [Gen. 43:13-14]
VIII. Ham, having seen his father’s nakedness, reports it to his brothers. [Gen. 9:22]
IX. Shem and Japheth, intending to cover their father’s privates with a cloak, enter, their faces averted. [Gen. 9:23]
X. Noah releasing a dove from the ark. [Gen 8:10-11]

I. The wedding of Abraham and Hagar. [Gen 16:4-5]
II. The sign of God addressing Abraham, lying on his back and in deep sleep, indicated by a right hand above him. Below, moreover, Abraham is seen as soon as he has awoken from sleep and has arisen. [Gen. 15:13]
III. Eber and his wife lying down, together with their son Peleg, distant ancestor of Abraham, seated next to them. [Gen. 11:15-17]
IV. Haran with his daughters Milcah and Iscah, of whom the first married Nahor, the latter, who was also called Sarah, Abraham. [Gen. 11:29-30]
V. Enemy spoils captured by Abraham in war, part of which he wished to be distributed to his three allies, Aner, Eschol, and Mamre. [Gen. 14:24]
VI. Sarah rebuking Hagar, who, once married to Abraham, had despised her. [Gen. 16:6-8]
VII. Abraham enjoining his slave to put a load on a pack animal, about to set out from the town of Charra [Ur?] for the land of Canaan. [Gen. 12:5-6]
VIII. The tower of Babel, where God, having assumed human form, confuses the speech of the crowd gathered below, soon about to scatter [them] throughout all lands. [Gen. 11:8]
IX. Arphachshad, son of Shem, with his wife and son Cainan. [Gen. 11:12-13]
X. Abraham, addressing three allies armed with shields and spears, who followed him to the battle in which he defeated Chedorlaomer and his allied kings. [Gen. 14:15-16]
XI. The king of Sodom, as it seems, his clothes girded as if about to mount a horse so as to set forth and intercept Abraham returning from his conquest of his enemy. [Gen. 14:17]